According to international standards set by the Istanbul Convention, domestic violence can be defined as “all acts of physical, sexual, psychological or economic violence that occur within the family or domestic unit or between former or current spouses or partners, whether or not the perpetrator shares or has shared the same residence with the victim.”

Source: Council of Europe (2011). Convention on Preventing and Combating Violence against Women and Domestic Violence

While domestic violence is a form of gender-based violence and thus disproportionately affects women and girls, anyone can be a victim of domestic violence, which can take many forms, such as: intimate-partner violence, child abuse, elderly abuse – for example, when at the care of relatives or professionals, or violence between siblings.

Domestic Violence can include several types of violent acts, such as acts of emotional, physical, sexual, and economical violence. Its definition and the type of acts understood as a form of domestic violence will vary depending on the national legislation.

Emotional abuse undermines a victim’s self-worth, confidence and independence by asserting the perpetrator’s control over them. It includes name-calling, embarrassing the victim in front of others, making threats (including to self-harm), among other acts.

Physical abuse consists of one or many actual or threatened attacks on someone’s physical safety or bodily integrity, including harming or threatening to harm pets or possessions, reckless driving with the victim, among others.

Sexual abuse includes any actual or threatened sexual contact without consent, such as unwanted touching, rape, exposure of genitals or making someone view pornography against their will, among other acts.

Financial abuse can include taking someone’s money, withdrawing access to household funds, controlling all the household spending or excluding someone from financial decisions that impact them

Read more on these different types of violence and their warning signs here.

The European Union does not have yet a common definition of domestic violence due to the lack of specific legislation on combatting domestic violence. However, the EU’s recent and first proposal for a Directive on Combatting Violence Against Women and Domestic Violence from March 2022 will aim to adopt a harmonised definition among Member States, in line with the Istanbul Convention’s.

While not all EU Member-States have adhered to the Istanbul Convention by the Council of Europe, on combatting violence against women and domestic violence, many member-states have ratified it and are bound to its obligations. Find out if your member-state has ratified the convention here. The Istanbul Convention recognises violence against women as a violation of human rights and a form of discrimination against women and puts forth a series of standards for victims’ support and strengthening the rights of victims of domestic violence.

The Council of Europe’s Istanbul Convention, a framework of legal and policy measures for preventing violence against women and domestic violence, has been signed and ratified by a large number of EU Member States. The Convention is monitored by GREVIO – the Group of Experts on Action against Violence against Women and Domestic Violence.

Several EU Member-States are also parties to the United Nation’s CEDAW Convention (1979) – Convention on the Elimination of All Forms of Discrimination against Women.  A Committee, a body of 23 independent experts, monitors the implementation of the Convention nationally.

Both the GREVIO and the CEDAW committee issue regular reports on the fulfillment of these conventions by ratifying countries. These reports are useful to know more about how each country is implementing the rights of victims of domestic violence.

Anyone can be a victim of domestic violence, and the signs may be particularly hard to identify as this type of violence takes place in the domestic or family unit.

The means to carry these crimes are also expanding due to the growing use of technological tools by perpetrators for controlling and monitoring their victims – for instance by accessing and monitoring the victims’ social media and emails, by connecting to devices in your home. It may feel like there is no way out from this person’s control, but victim support services, law enforcement and the criminal justice system are continuously improving assistance to victims of domestic violence, to stop harm and prevent its repetition.

It may be difficult to recognise that you are a victim of domestic violence and it can be even more difficult to protect yourself from it, as perpetrators in domestic violence may try to isolate you from other people in your life. You should firstly ask yourself whether your relationship with those around you is mutually respectful, or if you are intimidated or controlled in some way – psychologically, financially or physically?

Some of the indicators of children witnessing or experiencing domestic violence can include:

For more information about child victimisation, please consult our webpage.

It is important to note that the impact of crime is felt differently by each person. Every reaction of victims is normal when faced with an unexpected and potentially painful experience of crime.

The impacts of crime can be physical, psychological, social and economic, among others, and can last for long after the event. In the immediate aftermath, physical effects can be an increased heart rate, heavy or shallow breathing, sweating, dry mouth, tense muscles, feeling unable to move, feeling jittery or shaky, as the body is on high alert for further threats. These immediate effects can impact the psychological state of the victim and may lead them to act irrationally, to misunderstand information, to have issues remembering the event or what is communicated to them, and even act opposite to their best interest. Depending on the type of crime and the degree of physical violence, medical assistance might be necessary, as well as psychological first aid.

On the long-term, physical effects can linger on. For example, victims can experience recurrent loss of energy, muscle pain, headaches and/or migraines, menstruation disorders, cold sensations, shivering and/or hot flashes, digestive problems and high blood pressure, even long after the crime has taken place. Psychological effects of crime can also persist, or develop, on the long-term. These effects can include anxiety, difficulty concentrating, guilt, depression, isolation, trouble while sleeping, post-traumatic stress disorder, among other reactions.

There are also important possible social consequences of victimisation, such as the abovementioned isolation and tense relationships with those surrounding the victim. Victims have to rethink their relationship with the world around them, and the reactions of their surroundings may increase their inclination to isolate themselves. For instance, surroundings may misunderstand the victim’s reactions, or even blame the victim to preserve their own world views. Economically, the consequences of crime encompass the costs of medical or psychological support, or the costs of absenteeism from work due to the previous mentioned consequences of crime.

If you recognise any warning signs of domestic violence, in order to prevent further violence and protect yourself, you should create a safety plan to include:

If you notice any of the warning signs mentioned, or even physical bruises or recurring injuries in someone you know, they may be victims of domestic violence. You should first try to talk with this person, following certain guidelines:

Here you can find some harmful, and some helpful responses to a domestic violence victim.

Here you can find more resources, including on how to care for yourself if you are supporting a victim.

Many victims of domestic violence may be afraid of reprisals from the abuser if they report the crime. Whether you decide to report the crime or not, victim support services can help you navigate the justice system.

You can contact the police either by phone or in person. If you are being attacked or in immediate danger, you should use the emergency number, otherwise use the non-emergency number to file your complaint. If you decide not to report the crime immediately, you can do so later. The exact period of time after the crime that you can still report it will depend on the national legislation, but victim support services should support you no matter how much time has passed since the crime took place. Contact your local Victim Support organisation for assistance on any legal, psychological or social matters.

You will be given a crime report number and a police investigator will be allocated your complaint. The officer will handle the progress of your file up to and including the trial stage, if your abuser is apprehended and brought to justice. You will be expected to provide statements detailing the assault and its effect on you. You will be informed of your rights as a victim and you will be told what to expect if your case is brought before a jury.  Importantly, you have the right to legal aid in all EU member states and the right to an interpreter if the trial takes place outside your own country. Victim support services can help you through the criminal justice process.

If you have been affected by domestic violence, there are a number of ways you can contact support services to get assistance or information.

The 116 006 helps victims of crime by informing them of their rights and how to use these, offering emotional support, while also referring victims to relevant organisations. As a single access point, it will provide information about local police and criminal justice proceedings, possibilities for compensation and insurance matters, and other sources of help for victims of crime. 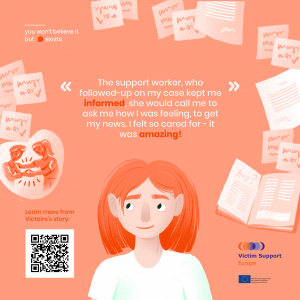 Stories of Survivors of Family Violence

Say it out loud – Stories of LGBTIQ survivors of sexual assault, intimate partner and family violence.