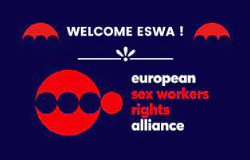 The European Sex Workers’ Rights Alliance (ESWA) is a sex worker-led network representing 103 organisations led by or working with sex workers in 32 countries in Europe and Central Asia, as well as more than 150 individuals including sex workers, academics, trade unionists, human-rights advocates, and women’s rights and LGBT+ rights activists. The core aim of ESWA is to ensure that the voices of sex workers in the region are heard, listened to and respected. We strive to raise awareness about the social exclusion of female, male and transgender sex workers in Europe and Central Asia; to promote the human, health and labour rights of all sex workers at community, national and regional level; and to build alliances with key partners, including sex workers and their organisations globally, NGOs and other civil society organisations and key stakeholders at the level of EU policy and decision-making.

ESWA’s vision is of a world where sex work is recognised as work; where all sex workers are respected and their rights are upheld; and where gender, racial, social and economic equality and freedom of movement are a reality enabling individuals to start, continue or leave sex work safely, and free from violence and coercion.

ESWA is a network of sex worker organisations and their allies that work together to support the development of national and international law, policy and practice, which respects and upholds the human and labour rights of sex workers throughout Europe and Central Asia.