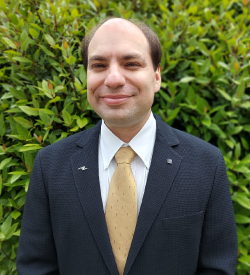 Jérôme has obtained a Master’s degree in Public Law in 1998, and has followed different trainings throughout the years, such as supporting victims of crimes abroad, victims of violence at work, or how to manage conflicts to avoid institutional violence.

He has worked for fifteen years, between 2002 and 2017, as a Parliamentary collaborator to a Member of Parliament for the First district of Nièvre (France) who was also President of the National Consultative Council for People with Disabilities.

In 2020, he became Director of three departments of the “Association des Paralysés de France-France handicap”: he is therefore working for the most important French association for the defense and representation of people with disabilities and their families, after working as an Executive Assistant for this association for three years. In addition, Jérôme Moreau has been working as a trainer for the Red Cross and the “Centre National de la Fonction Publique Territoriale” (National Center for Territorial Public Service), since 2013, and has been working as Director of a mobile Covid-19 vaccination team since April 2021.

Jérôme has always been attentive to furthering European rights and advancing the implementation of the Victims’ Rights Directive of 2012, through his several duties. That is why he has the honour of applying for the position of Vice-President of Victim Support Europe.