By Marina KazakovaJuly 20, 2021News from members
No Comments

With the publication of Directive 2012/29 / EU, the rights of victims of crime have come to be the object of greater protection. However, for these to be effective, just legal texts are not enough, it is necessary to understand the protection system in its entirety to determinate better solutions. With this in mind, and considering the growing concern of the European Union with the full implementation of the text of the Directive, the PROVICTIMS project was developed, whose main objective was to demystify the roles that actors in criminal proceedings play in guaranteeing the protection of victims’ rights. 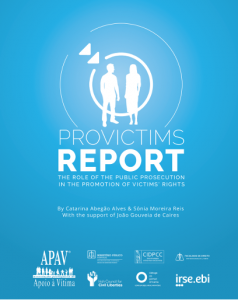 During the research developed in the report, it was found that the effectiveness of the victims’ rights depends on a delicate balance between the representation of the State and its interests as well as the fundamental rights and guarantees of the accused, a result that is not always easily achieved. That is why the victim support services play an essential role in this articulation, as they ensure the commitment to their rights as well as guarantee an exchange of synergy between the other agents of the criminal services.

This report written by Catarina Abegão Alves and Sónia Moreira Reis with the support of João Gouveia de Caires, is a unique contribution in terms of academic research, with fundamental and practical recommendations that can help build a better protection system for victims of crime.

The brochure on Victims’ rights and the public prosecution service – 10 questions and answers highlighted the crucial role prosecutors play in making rights effective and accessible for victims of crime.

The PROVICTIMS project was developed in collaboration between APAV and institutions from four European countries, namely the Irish Irish Council for Civil Liberties, the Spanish IRSE-EBI, the Procuradoria Geral da República, Attorneys General’s Office (PGR), the Victims Help and Support Organization White Circle Croatia, of Croatia and the Centre of Investigation for Criminal Law and Criminal Sciences of the Faculty of Law of the University of Lisbon, Portugal.

These outcomes were developed as part of the activities of ProVictims Project, co-funded by the Union’s Justice Programme (2014-2020).

It is estimated that about 1 million people are victims of cybercrime a day. While the Internet has facilitated activities such as shopping and banking and has allowed for interpersonal contact despite distance or physical borders, it has also created another setting in which crime can occur. These cybercrimes may include phishing, fraud, stalking, hate speech, and child sexual abuse.

Aiming to protect, empower and care for victims of electronic crime, the ROAR project was developed by APAV in partnership with institutions from two other European countries, namely the German WEISSER RING and the Romanian ACTEDO, in addition to the national partners, PT Portugal, the Attorney General of the Republic (PGR) and the National Republican Guard (GNR). And this project was funded by the European Union’s Internal Security Fund – Police.

During the project execution, thematic workshops were held for security forces and judicial authorities, with the purpose of drawing attention to the problem of cybercrime and the need to also protect the victims of these crimes. In order to empower and raise awareness of potential victims of cybercrime, the pedagogical aspect of the project carried out training actions for children and young people, distributing informative materials.

The result of all these actions culminated in the elaboration of a manual of procedures to be adopted in case of assistance to victims of cybercrime, in addition to a set of recommendations to help clarify eventual issues and facilitate the fieldwork, policy paper. 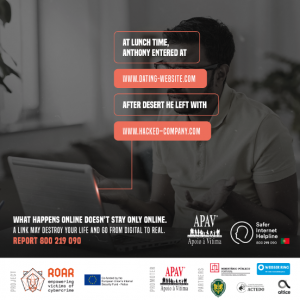 The ROAR manual is divided into two main sections: Understanding and Intervention. With the low rate of reporting cybercrime, one of the aims of this section is to educate Internet users on relevant concepts regarding cybercrime so that they are better equipped to take action if they become victims. By providing information on the legal framework surrounding cybercrime, particularly in countries part of the European Union, it shows how necessary it is for these countries to individually and collectively stay up to date on their policies and laws in order to wholly protect all of their citizens. With the knowledge from the first section that cybercrime can have emotional, economic, and physical effects on victims, the second section of the manual focuses on the actions that can be taken to address cybercrime and to support victims in every aspect necessary. In discussing cybercrime and what it entails, the ultimate goal is to not only be able to help these victims but prevent these crimes from hurting more Internet users. Therefore, this handbook ensures the understanding, intervention, and prevention of cybercrime.

In the policy paper, the focus is to address cybercrime at the domestic level and then form partnerships (especially among the EU) that will allow for a united, international approach towards preventing the crime and protecting the victims. It acknowledges the faults and challenges in legislation that are currently in place in certain countries in order to emphasize the need for policies to evolve at the same rate as cybercrime. Cybercrime can be better addressed not only with more proactive legal measures but also with better understanding of it. For example, the paper promotes professional research and access to education of cyber risks and reporting. Cybercrime can threaten individuals, groups, companies, and governments, which is why this policy paper in addition with the handbook are vital in continuing to promote the safety and protection of communities.

The both documents can be consulted here, available in English and Portuguese.

* The content of this project represents the views of the author only and is his/her sole responsibility. The European Commission does not accept any responsibility for use that may be made of the information contains.

One of the most recent problems in terms of mass victimisation is related to crimes of terrorism, which have their roots closely related to radical discourses. To try to face this problem, in the legal framework, a series of provisions were created, in order to the promotion of cooperation between nations and also to establish minimum standards to protect the victims, such as Directive 2017/541/UE, at the European level, which introduces several changes at the national level. In light of the binding legislative developments and the rise of terrorism at a global scale, also the National Strategy on Combatting Terrorism had its revision 2015, and one of the pillars of the new strategy is characterised by know and identify the causes of radicalisation and, as consequence, the terrorist acts. In this sense, prevention may be a great deal supported by not only specific investigation, collection and best practices sharing systematisation of the knowledge produced both in terms of prevention strategies.

However, radicalisation is dynamic, is a single yet group process. Radicalisation happens online and offline, in small conversation, in schools, in neighbourhoods, and in communities. Not only do law enforcement and intelligence agencies play a vital role, but those who study crime and victimology.

This phenomenon conduct several questions, like how to prevent radicalisation leading to violent extremism? How do we prevent online radicalizations?

By virtue of a series of risk factors set out in several theoretical approaches to the phenomenon of radicalisation leading to violent extremism, such as identity crisis, the seek for belonging, or the manifest primacy of socialising online, amongst others, youngsters have been identified as the most vulnerable part of societies to this process. Amongst the youngsters, young migrants, or second generation of migrant families, refugees, and asylum seekers are considered to be particularly vulnerable, both due to possible difficulties in their integration process both by the grooming strategy of the recruiters themselves, often associated with messages that strengthen feelings of exclusion and segregation, as well as promises of an oasis of fraternity and group identity, of significance and life-meaning for an ideal or cause.

With it in mind, APAV, centred in preventing mass victimisation, purposed to try to understand that phenomenon and create tools able to help to prevent radicalisation and, per consequence, avoid the last consequence of it that terrorism situations. This was the motto that gave rise to project Counter@act: preventing and fighting online radicalisation.

Project Counter@act was centred in two different approaches, on the one hand, to study the online behaviours of young migrants and refugees in Portugal, but on the other hand, to develop an alternative narrative, through an online campaign, to those these youngsters might have come across during their online or offline socialisation and integration.

From that interaction virtual by our actions, the Counter@ct Project developed a very practical guide to those who, in the future, wish to develop such an online alternative narrative campaign, based on the concept of storytelling of real stories, of real young migrants and refugees in their current communities. The guide, split into two parts, explain first how to analyze the target audience and apply the GAMMA+ Model. In a second step, the manual helps prepare, apply, and implement counter-narrative campaigns based on alternative speech. In the end, the purpose is to explain how to verify the results and the impact of the campaign.

The guide, which will be launched soon, will further shed light on what needs to be well thought of before strategically planning the launch of a counter-narrative campaign, whilst also developing an impact assessment methodology in order to evaluate, based on empirical and statistical indicators, if the campaign was successful in conveying its message. APAV already can say that the project was a great opportunity to see, in practice, how the campaign influenced positively the target audience.