‘Future of Justice for Victims in the European Union’ event report is published! 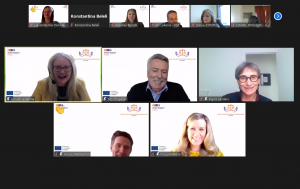 The event, part of VSE’s 2022 Safe Justice For Victims Action Week, focused on the major challenges – and opportunities – encountered by  victims  during  their  journey  towards justice; knowledge and opinions were exchanged by victims and experts in the field. The debate was held on the Conference on the Future of Europe platform, which provides European citizens with an opportunity to debate current European challenges and priorities, as well as to make recommendations.

A total of 107 participants joined the debate, including representatives from victim support organisations (36%), civil society organisations (15%), justice system practitioners (13%) and law enforcement (13%). The event aimed to advance the debate on victims’ rights and to advocate for building safe justice practices for victims of all crimes and the effective enjoyment of their rights. The event was moderated by VSE’s President, Geraldine Hanna, and brought together guests with varied expertise in victims’ rights.

This article provides a summary of the speakers’ presentations, highlighting the recommendations put forward for improving justice for all victims in the EU.[1]

Levent Altan discussed the concept of safe justice and its practical application, stating that victims too often feel let down by criminal justice systems that do not deliver the justice they expected. Despite the vast progress that has been made since the first EU victims’ rights legislation 20 years ago, and after the introduction of the Victims’ Rights Directive in 2012, its implementation has not met the needs of victims, nor reduced the effects of harm following a crime. Victims’ experiences within the justice system leave them questioning its raison d’etre and why they feel worse off having taken part in it.

VSE is developing a better understanding as to why many victims are unable to benefit from their rights, exploring why some justice systems seem to work better than others. With this information we hope to support, at the European Union level, the decision-making process on upcoming EU legislation on several related topics.

Nowadays, most justice systems focus solely on determining the guilt of the alleged offender when measuring their success, thereby excluding the feelings of victims. To move forward, we need to include the experience and safety of victims within the concept of justice and its success. VSE will spend the coming years exploring the concept of safe justice, improving its knowledge on best practices, understanding where countries fail or succeed, and promoting improvements to justice systems. A paper on the concept of safe justice will be published by VSE in the first semester of 2022.

Nina Fuchs is a survivor of sexual assault who has been advocating for the rights of victims of sexual violence. Nina shared her testimony and emphasised how her experience with the justice system was more traumatising than the violence itself, thus calling to the audience’s attention the importance of preventing secondary victimisation during justice proceedings and by the practitioners involved in them.

She highlighted core recommendations for improving victims’ experience with justice, such as tackling the under-reporting of crime via massive awareness raising campaigns aimed at countering victim-blaming by showing victims they can share their experience of victimisation and be welcomed in a safe environment. Campaigns can also provide victims with information before the onset of victimisation – the information process must start before participation in the criminal justice system, through extensive campaigns using public transport, billboards, and other media formats.

Ms. Fuchs also recommends that training practitioners, who are in direct contact with victims, must include knowledge on trauma response, empathy, and demystifying common rape myths. Finally, she stressed that we must ensure the admissibility of video recordings as evidence in cases of sexual violence, as repeating the experience several times during the process can be retraumatising.

III. Live debate on the Future of Justice for Victims in the European Union

Ingrid Sanders addressed the issue of under-reporting (crime) and highlighted the difficulties victims may face when lodging a reporting: including guilt and shame, and no prior communication with law enforcement. She believes free legal support for victims is essential to tackle these issues. Ms. Sanders further stressed the importance of collecting evidence within the first 72 hours of the crime, and as good practice recommends, following the model of Belgium’s care centres for sexual violence. These multi-agency centres can increase reporting rates by providing victims with all services under one roof and by making the collection of evidence faster and easier.

Other recommendations included the importance of officers being able to encourage, rather than pressing, victims to speak, demonstrating empathy, having an open mind and being attentive to the individual victim’s story; all essential to rebuild trust in the police and in justice.[2]

Presentation by Antony Pemberton, Professor at the Leuven Institute of Criminology and Senior Researcher at the Netherlands Institute for the Study of Crime and Law Enforcement (NSCR)

Antony Pemberton spoke about the importance of victims’ access to information, support and protection throughout the criminal justice process. He noted that, currently, victims’ rights are not actually rights, but rather provisions, as there is no remedy for their violation; he thus suggested the need to devise legal remedies for the violation of victims’ rights. Inspiration can be drawn from other areas of law to formulate these remedies. Notwithstanding, the priority should be to prevent violations, thus protecting victims from being involved in numerous justice proceedings.

Mr. Pemberton also recommended looking beyond the law for solutions, and suggested a series of non-judicial mechanisms:

In sum, Mr. Pemberton’s main recommendation is that victims’ rights must become the priority, and not an afterthought, of prosecutors, judges, law enforcement agencies and others. He believes the principles of restorative justice should be mainstreamed in order to place victims at the centre.

Frida Wheldon discussed ways to ensure the active participation of victims in the criminal justice process. She noted how most legal systems in Europe conceive crime as an offense against the State, and not the victim, depriving victims of recognition. The victims’ role in the criminal justice system must continue to be improved, moving from a needs-based approach to a rights-based approach.[3] According to a poll that was launched at the end of this session, almost all participants believed victims must take on a greater role in criminal justice proceedings.

Presentation by Tim Chapman, Chair of the Board at the European Forum for Restorative Justice

Mr. Chapman stressed the importance of the victim regaining control after a crime, and the way that restorative justice can help by centring the individual victim’s needs, and in some cases by providing remedy and reparation through meetings with the perpetrator and sharing their story. Contrary to the criminal justice system, victims in restorative justice practices have flexibility in co-designing the practice, thereby empowering their decision-making.

His main recommendation is that we ensure victims’ access to high quality restorative justice, and that informing victims on their rights should include providing them with the ability to take part in these practices, with victim support services being proactive about informing victims of this opportunity. According to the end-of-session poll, supporting the right to access restorative justice services should be guaranteed for all victims of crime; this was also the belief of most of our participants.

The event was successful in engaging viewers and panellists in discussion. There was much positive reaction from participants, with Nina Fuch’s testimony being particularly appreciated and praised. One participant said: “Thank you so much Nina for your courage to speak today and to take your case to the European court. Your stories and those of other victims is exactly why we need to have these discussions and see change happen.”. There was great interest in the panellists, with one participant stating “It has been a pleasure to listen to all the panellists. I really appreciate the opportunity to participate in the webinar. It promote important reflection. Thanks to the organization.”. 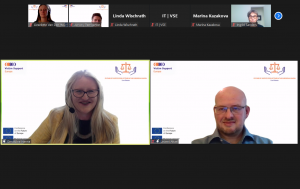 Another participant stated that the event was an “excellent initiative both in terms of content and sharing experiences.”, showing how the inclusion of victims’ voices in policy discussions enriches these reflections. Participants were active in providing suggestions and in identifying the needs of particularly vulnerable victims, such as persons with disabilities, migrant victims and sex workers. Though from different areas of expertise, all attendees contributed valuable knowledge and feedback that can be used to develop a better understanding of the concept of safe justice and to strive for the effective application of victims’ rights in the EU.

The event proved to be useful in explaining and elaborating on the concept of safe justice, as well as in working towards improving it to provide a victim-centric solution to justice for all those affected by crime.

[1] The views and opinions expressed in the recommendations are those of the speakers and do not necessarily reflect the views or positions of VSE.

[2] During this discussion, a participant from the European Sex Workers Rights Alliance (ESWA) shared resources regarding the particular problems sex workers face when reporting crimes, namely a report on the portrayal of migrant sex worker victims as undeserving victims, and a short film on exploitation of migrant sex workers.

[3] A study by the Fundamental Rights Agency regarding victim participation was shared in the chat, which indeed showed the importance of the right to information for the effective use of victims’ rights.