Victim Support Europe and partners launch a campaign ‘You won’t believe it, but it exists’ to inform of support services available in the EU

BRUSSELS, 22 February 2021 – As this day marks the European Day for Victims of Crime, Victim Support Europe is excited to announce the launch of its “You won’t believe, but it exists” information campaign. Conducted with 14 partners across 13 different countries, the campaign intends to inform general public of the existence of victim support services and to encourage victims to reach out these services.

The campaign will deliver tailored information about the support services to the estimated more than 9 million of victims of crimes in the 13 countries [1]. Animation speed-paintings, videos and other information materials (billboards, posters, brochures, stickers, etc.) will be rolled out in social media and offline from 22 of February till the end of 2021 under the hashtag #itexists.

“An important EU law for victims of crime was established in 2012: the EU Victims’ Rights Directive is a legal statute that the majority of the EU citizens aren’t aware of. All victims of any crime that took place in the in EU has the right to free victim support services, and every Member State has to establish a national victim support service. Currently, most EU countries can now offer these services to victims; however, over half of the general EU population is unaware of the Directive and the availability of support services [2]. This campaign aims to fill that knowledge gap. The information focuses on ensuring that people know what a victim support service is and where to find help in the aftermath of a crime,” said Marina Kazakova, Communications Officer, Victim Support Europe.

The campaign features the faces and voices of victims, whose stories we learn through the medium of animation and video. Through these films – one per country, in its national language – the victims take the viewers on a powerful and emotional journey through their stories. From the opening scenes of stunning vistas of the victim’s home country to the location where the victim’s narrative takes place, the videos showcase the effects of crime on the victims and how they were empowered to respond. The characters share their experiences, their doubts and their fears, how they learned about victim support services, how they found the courage to look for help, and how their lives were changed by the support they received.

The campaign consists of two components: 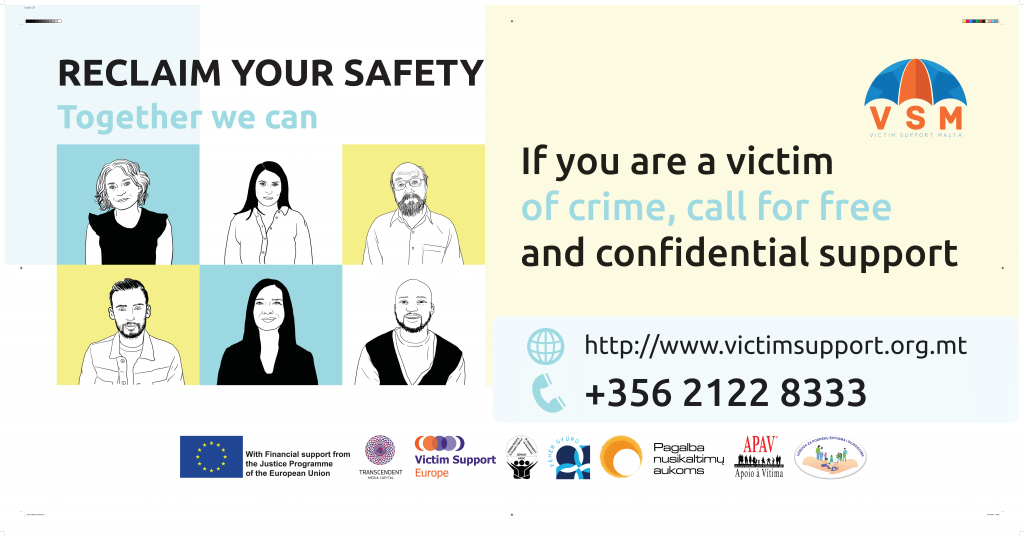 This multi-country campaign builds on the recent EU Strategy on Victims’ Rights, adopted by the European Commission in June 2020. The campaign is in line with the priority of the strategy ‘Effective communication with victims and provision for a safe environment for victims to report crime’ to achieve the EU’s objective to empower victims to report crime. The campaign was produced with financial support from the Justice Programme of the European Union.

“An innovative aspect of the campaign is reflected in how information tools were developed. First, in-depth research on the best practice in delivering information to victims was conducted, in partner countries and at the international level. Based on that research, the partners developed creative and tailored information materials that respond to the victims’ needs”, said Inês Nunes de Freitas, VSE’s Project Officer, who coordinates the PREVICT project.

For more information and to discover the campaign content materials, please, consult the campaign webpage ‘You won’t believe it, but it exists’.

[1] According to Eurostat data, around 25 million criminal offences against persons or property, excluding minor crimes, are recorded annually in the European Union. Yet, most crimes are never reported, which leads to an estimate that there is likely to be up to 75 million direct victims of crime every year in the EU. Thus, 15% of population falls victims to crime. Hence, the campaign aims to reach these segment to get them informed about available support services. 20 million people is approximately 15% of the combined total population of the campaign partner countries. The campaign goal is to reach at least half of the total number, which is approximately 9 million people.

[2] The estimation is based on the 2-year in-depth research conducted by VSE within the VOCIARE project, the outcome of which was a report from 26 EU countries that tracks how EU Member States implement the Victims’ Rights Directive 7 years after it was established. Learn more about VOCIARE research.