M. and Amo’: how facility dogs can make a difference!

By Marina KazakovaNovember 8, 2021News
No Comments

Amo’, a 3-year-old German shepherd, was trained as a facility dog by Viviana Cialoni, an experienced instructor for Dog4Life.

Part of Amo’s training was dedicated to simulations so that he would be able to react properly in any kind of situation and interact with any kind of vulnerable victim. (As Dog4Life protocol indicates, proper choice of puppy and good and balanced training).

Amò is part of the Dog4Life team for the European project FYDO in Milan.
Victim Support Europe is FYDO (Facility Dogs in Europe)  project’s coordinator. 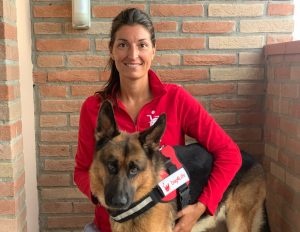 As a training session and a simulation opportunity, Viviana was invited by Daniela, an educator who was volunteering, to visit with Amò to a summer camp organized by the military (Alpini) for children aged 10 to 15 in the mountains near Bergamo.

So, off she went with the good looking Amò wearing his Dog4Life vest. The kids were quite excited to see a big dog responding to commands given in a soft-spoken voice!

Amò was happily posing for a photo shoot with the kids, however his gaze kept going to the same child seated a few meters away and when the picture session was over, Amò got up and went directly to that precise child who he had spotted earlier. Naturally and without any command or indication, Amò had noticed and sniffed the stress and pain of that child….

M was extremely happy that Amò had noticed him, he sat down to caress Amò for a while, the other kids started dispersing to their other activities though M. was totally oblivious of people and his surroundings, focusing only on Amo’, speaking to him in a very low voice.

Viviana gently asked permission to sit with him where M started saying that his stomach was hurting and he felt extremely tired.

Viviana as a mother and a pedagogist knew that M. was under a turmoil of emotions because the dinner bell was ringing, so she proposed to have dinner together with Amò.

M was very pleased to enter the dining hall with Amò on the leash. After helping themselves at the buffet, Viviana and M. sat at a table with some children and some adults, among them was Daniela, who was absolutely surprised to see M eating his dinner. (She then approached Viviana, telling her that this boy had problems with troubled sleep and had an upset stomach and was vomiting, visiting the infirmary every night).

M. ate his supper with Amò by his side, after dinner the kids were called to listen to a speech, M asked Viviana to sit together with Amò.

After a few minutes, M. asked to sit in the back rows on the floor. After a couple of minutes M. was laying down embracing Amò, his camouflage cap resting on Amo’s head!

M started telling Viviana that he was afraid she would soon be leaving and he would be on his own, throwing up and not being able to sleep!

Gently, Viviana asked him if he was sick every day? M told Viviana he was being rudely bullied since the very beginning of the summer camp because he was slow to eat and not so “sporty” in the activities, he was particularly bullied at the mess and during the night in their tent. (Hence the vomiting and sleepless nights, he would only find some solace at the infirmary).

Viviana, although it was quite late, decided to stay until bedtime while M. was lying down stroking Amò s fur! When the night bell rang, seeing the fear and despair in M.’s eyes, Viviana gave him Amo’s vest to sleep with. (That night M. slept embracing the vest, he did not throw up and slept all night long.)

Viviana had arrived that day at the summer camp for a two-hour max simulation exercise with Amò and she left more than 6 hours later with a heavy heart. The next morning, she called Daniela, her friend, the educator who was on night duty at the camp infirmary to inquire about M. Daniela’s voice was chirpy and joyous while she told Viviana that M. had slept all through the night!!

Viviana visited again the following evening giving M. Amo’s vest for another night to sleep with and a little note (telling M. that she was very proud of his courage, that it was good to talk about his suffering, and that Amò was his friend)

The next day, M. went on an excursion with his group and was badly bullied for being slow and for other futile motives. Instead of bowing his head, M. raised his shoulders and said with a firm and convinced voice that it was enough now, that it was impossible to withstand so much meanness, nastiness, every day, every night for over a week, lunch time, dinner time, outside during exercises, in the tent during the night. M. got nervous and with a certain fury and admirable strength he asked the bullies if they had any idea of the living hell this week had been for him? All were taken aback, the responsible because they had no idea and the educator because this young boy was teaching such an impressive lesson!

And the bullies? Most of them were crying, some were extremely ashamed, none of them had realized how much they hurt M. with their foolish behavior.

M. went on saying that the only help he received was from a dog and his handler and from the lady who let him sleep at the infirmary when she was on duty!!

The bond created between the dog and the child had been a good trigger for a strong reaction from M. against the bullies!!

This episode is quite eloquent; a dog can really make the difference, hence, the necessity of training facility dogs to support vulnerable victims during judicial procedures, police statements, hearings in court, shelters for domestic violence and advocacy centers.

Viviana and Amò, Dog4Life team in Milan for The European Project FYDO, invite you to see the video.

Victim Support Netherlands: The right to speak in criminal trials