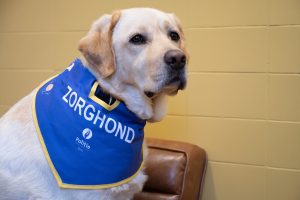 A few months ago, a very special new colleague started working with the Ghent police. His name is Fluf – a male two-year old Labrador retriever. Fluf is a facility dog – a professionally trained dog that provides emotional support to victims and witnesses. He has a soothing effect on them in stressful situations, and provides encouragement, enabling them to tell their story. In addition to this, a facility dog can also help victims and witnesses to cope with trauma.

Fluf will be in attendance during conversations with victims and witnesses. Through his gentle presence and his sincere attention, he can put victims at ease, break the ice and provide support and guidance.

“Dogs do not make judgements, which is why they can mean a lot to victims.” – Mark van Gelder, Canisha

Given his important role in the care and treatment of victims, Fluf, like his owner Evi, is part of the victim care unit of Ghent police.

Fluf and Evi were, and still are, trained by the non-profit organisations Hachiko and Canisha. Both organisations continue to closely monitor and professionally guide Fluf and Evi. Fluf came to live with Evi’s family in April 2021. Soon after, he started to work with Evi in the offices of the Ghent Police. Once he got to know the workplace well, Fluf received further training through role-playing, to be on his best behaviour with victims. In the long term, two other consultants from the victim care unit will also be trained to work with Fluf.

“Fluf symbolises what our police force stands for: not only to catch offenders, but also and more importantly to assist victims.” – Mathias De Clercq, Mayor

How it all started

Fluf is the first facility dog to be trained in our country. In the Police Zone Brussels Nord (PZ BruNo) there is another facility dog, Switch, but he was trained in Canada. It is through the Canadian police network, Réseau Intersection, that our chief of police learned about the use of facility dogs. He immediately understood the potential of the idea and it took little effort to convince the victim care unit of Ghent Police, and Evi in particular, of the benefits of working with facility dogs. 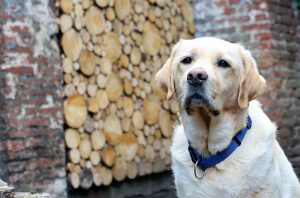 It was originally the intention, as with the PZ BruNo, to purchase and train a care dog via a Canadian organisation. But the Ghent police application ended up on a very long waiting list. And just at that moment, the paths of the Ghent police crossed with those of Hachiko vzw and Canisha vzw – both training centres for assistance dogs. The organisations were already invested in the concept of assistance dogs in victim care and were looking for partners to start up a joint project. It soon became clear that our police corps, Canisha vzw and Hachiko vzw were on the same wavelength. After a few exploratory talks with the chief of police, our zone decided to join forces with these two organisations. The fact that Merelbeke and Deinze are closer to home than Canada was also a nice bonus.

Fluf is now also part of a pioneering European project, FYDO (Facility Dogs Europe), in which Hachiko vzw and Canisha vzw, under the leadership of VSE (Victim Support Europe), are developing a European standard for facility dogs.

“Based on our expertise and that of fellow organisations from France, Italy, England and Ireland, we want to develop a manual, say a kind of quality label, for the training of facility dogs that should become a reference on a European level.” – Sandra Demeester, Hachiko 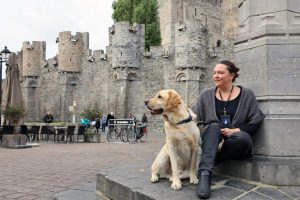 In the meantime, Fluf has become a well-known and, above all, popular colleague in the police force. He is not only symbiotically interwoven in the workings of the Bureau Politionele Zorg and in the entire force. He also provides a fresh internal dynamic among the Ghent police officers and is very much appreciated. Because this is such a unique story, and there is so much to tell, he also has his own internal blog, ‘100% Fluf’. Through his regular blog posts, Fluf keeps his colleagues informed of his adventures with the Ghent police. He talks about his further training, his experiences, special cases, stories of victims, the European project he is part of, etc. But there are also fun topics such as his eating habits, hobbies, holidays and favourite toys.

Canisha vzw is an assistance dog school, recognised by the Flemish government, with more than 17 years of experience in training assistance & hearing dogs. In 2016 autism dogs have been added to this list. These assistance dogs do not only literally open the door for their owners but also figuratively open the door to society. They provide their owners with increased self-reliance and autonomy. More information can be found on the website of Canisha.

Victim Support Europe (VSE) is the leading European umbrella organisation that advocates on behalf of all victims of crime, no matter what the crime, no matter who the victim. VSE represents 61 national member organisations, providing support and information services to more than 2 million people affected by crime every year in 31 countries. Click here to visit the VSE website.

Results and recommendations of the ARVID project