This text contains topics such as sexual violence, rape, bullying and psychological violence. 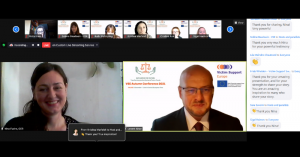 Today, we would like to share the story of Nina Fuchs (Germany), who delivered a powerful speech at VSE’s Autumn Conference 2021. Nina is an incredibly clear, strong, and focused woman who has managed to free herself from the victim role in order to raise her voice for those who don’t have a voice.

“Almost 9 years ago, in the night of 19 April 2013, my life changed very suddenly. The evening that started with a nice party together with my friends in a well-known club in Munich ended with rape in the park opposite the club. I still have a 2-hour blackout and have no clue how I got into the park. Someone put a rape drug in my drink and made sure I was easy prey. I vaguely remember some hazy images when I slowly came round – some bushes and two men sexually abusing me.

On my way home in the tram, tears ran down my face, I felt miserable, I didn’t know what had happened. When I was examined by a forensic doctor about 10 to 12 hours after the crime, no traces of the rape drug could be found any more, but there was still an elevated alcohol level in my blood and they found the DNA of one of the perpetrators. Unfortunately, there was no match in their database. The police didn’t believe my story. 10 months later the case was closed because gaps in my memory meant I wasn’t able to provide a precise description of the perpetrator.

The German victim support organisation “WEISSER RING” believed my story. I received support and a lawyer. Thanks to him, I could appear as a joint plaintiff and get access to the files. He told me back then that it was possible that the perpetrator would be found and identified on the basis of his DNA in the years to come.

For several years, nothing happened and at some point my hopes died that the perpetrator would ever be found. I started to get involved in publicizing the subject. I gave interviews for newspapers, took part in television programmes and campaigned – especially on behalf of the numerous other victims who are too traumatized to speak out themselves. Then suddenly – at the same time as the German TV programme “37 Grad” in which I took part was broadcast last May – the police found a match in the database. I was very excited and called the prosecutor’s office in Munich.

In a half-hour phone call the prosecutor encouraged me. She told me how much she admired my participation in the TV programme, because only in this way could something change in society and thus in the legal system. She assured me that there will be another thorough investigation. She gave me a feeling of solidarity and that she had my back.

For a long time, nothing happened because the suspect could not be found. On 2 January, the prosecutor called me. After wishing me a happy new year, she informed me that the suspect was in custody (due to another offence) and was not giving any testimony regarding my case. She told me that she didn’t see a chance for a conviction and would therefore close the case. And that she wanted to apologise in advance because the reasoning in her official letter might sound a bit harsh.

Mainly it sounds very absurd and hardly comprehensible: “The DNA traces are indeed proof that physical contact between the victim and the suspect took place. However, since the victim cannot remember long periods of the night of the crime, it cannot be proven that the suspect is actually one of the two perpetrators. In particular, one cannot be sure that the victim had sexual contact with other men during the night of the crime. Under these circumstances, the suspect is more likely to be acquitted than convicted. There are therefore no grounds for filing a lawsuit.”

My lawyer has a very different opinion. He talks about an absolutely scandalous procedure. Due to the fact that the forensic doctor’s report clearly proved that the DNA was identical, he – in contrast to the prosecutor – foresees a very good chance of a conviction. And he is very angry because this is not the first case that this particular prosecutor has rashly closed. He has filed a complaint against the suspension. When he received the requested file in order to justify his complaint, he found that the prosecutor had removed 5 pages from the file and put them in a separate volume. Only following a further request and after waiting a long time did he finally receive this special volume. It contained the report by the forensic doctor in which, among other things, typical rape injuries on my upper arms were documented. A very weird way to handle a case, if you ask me.

In May 2018, the alleged perpetrator was found in the police database based on DNA traces from his sperm. Nevertheless, the prosecution dropped my case, and neither the complaint filed by my lawyer nor a very successful online petition and a lot of media attention could change that. A couple of weeks ago, at the end of May, even the Higher Regional Court rejected my enforcement proceedings and confirmed the decision of the prosecution once again.

My case clearly shows the structural and systematic discrimination that victims of sexualised violence are exposed to by the judiciary. The fight for a fair trial, let alone for a conviction or a just sentence, is almost hopeless, as the statistics prove: of all reported rapes, only 7.5% of the cases in Germany result in a conviction. Considering this, the decision of the prosecution, which is a free pass for every single perpetrator, is absolutely disastrous. Especially since such a decision always serves as a reference for further decisions – especially if it has been confirmed to be correct by two higher authorities, such as the Attorney General’s Office and the Higher Regional Court. The thought that in the future even more women will be denied a fair trial because of my case is unbearable for me and this is the reason why I have decided to continue fighting and to go to Germany’s Federal Constitutional Court.

The chance of success at the Federal Constitutional Court is unfortunately very small, but it is my only chance to go to the European Court of Human Rights (ECHR). This fight will take years, I will need a lot of strength, time and energy, and it will also be very challenging on an emotional level. And above all, it will cost a lot of money. Just for the complaint for the Federal Constitutional Court, I had to borrow 10,000 euros. On top of that, there are the lawyers’ fees for the ECHR plus the court fees. All in all, this can amount to a total of 25,000 euros.

As expected, I did not succeed in front of the German Federal Constitutional Court and since July 2021, my case is  in front European Court of Human Rights (ECHR) in Strassbourg.”

Looking back at VSE Autumn Conference 2021