We identified over 25 cases that covered various issues concerning investigation into cases of child sexual abuse, secondary victimisation during criminal proceedings, investigation into hate crimes and into murders, and their consequences on, among others, the victims’ families. One particular case of interest, identified in ECJ caselaw, involved the right to residency for victims of domestic violence (p 26 of the report). 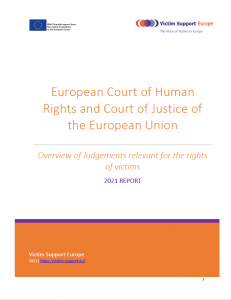 Assessing cases linked to Article 3 (prohibition of torture and inhumane and degrading treatments), the ECHR reaffirms that amnesty and pardon are not applicable to cases of torture, degrading treatment and violent acts conducted either by the State or private individuals, nor consequently applicable to rape. The Court also insists on the obligation to conduct an effective investigation in the context of child sexual abuse, as well as on the need to adapt procedural rules to children’s needs in order to guarantee children’s safety in pre-trial, trial and investigations.

On Article 4 (prohibition of slavery and forced labour), emphasis was placed on the need to conduct a proper assessment of potential victims of human trafficking, as soon as there was credible suspicion of exploitation.

Linked to Article 8 (protection of private and family life) and Article 14 (prohibition of discrimination), the ECHR found that the lack of accompaniment of the victim before the police and the prosecutor and the preventive and protection measure during the trial of a victim of sexual abuse constituted secondary victimisation. A similar conclusion was reached in the case of discriminatory language used by judges in their decision on a case of sexual assault. The Court additionally condemned authorities over the lack of protection from cyber-violence, from homophobic ill-treatment and of investigation into allegations of hate speech.

ECJ caselaw:
In the case of interest identified, the ECJ evaluates whether the difference of status – family reunification with an EU or other national – for third-country nationals, who are victims of domestic violence, infringes the principles of equality before law and non-discrimination guaranteed by the EU Charter of Fundamental Rights (Articles 20 and 21 respectively).

VSE 2022 Spring Newsletter is out!