You won't believe it but it exists

Find out more about the campaign

In these unprecedented times, we need your support to ensure that all victims of crime are protected and supported across Europe. Every year more than 75 million EU citizens fall victims of crime and millions more still suffer from past crimes. With countries in lockdown we have seen significant rises in domestic violence and online crime. With the shadow of economic crisis and unemployment looming, we are also likely to see rises in general crime.

What we want to change

We want to make sure that:

All victims in the EU are entitled to support and assistance in the aftermath of crime, regardless of whether or not the crime is reported to the police. Victim Support Europe advances the development of victim support services that are:

Find your victim support service on our Interactive map.

Becoming a victim of crime is a difficult experience. Getting quality support should be easy. The new EU Victims’ Rights Strategy aims to achieve this.

“The campaign is designed to encourage people everywhere in the EU to learn about victims’ rights and the existence of support services and to give victims a platform to speak out about issues they are going through. We are grateful to campaign partners for their spirit of collaboration in helping Victim Support Europe reach diverse audiences”, says Levent Altan, Executive Director of Victim Support Europe.

Conducted with 14 partners across 13 different countries, the campaign intends to inform general public of the existence of victim support services and to encourage victims to reach out these services.

The campaign will deliver tailored information about the support services to the estimated more than 9 million of victims of crimes in the 13 countries. Animation speed-paintings, videos and other information materials (billboards, posters, brochures, stickers, etc.) will be rolled out in social media and offline from 22 of February till the end of 2021 under the hashtag #itexists.

While provision of information is one of the most important needs recognised within the 2012 Victims’ Rights Directive, the level and quality of information delivered strongly varies from one Member State to another.

The campaign features the faces and voices of victims that we discover through the campaign animations and videos. In these films – one produced for each partner country, in the national language, victims invite the public on a powerful and emotional journey through their stories. From its opening, spotlighting stunning vistas of the country landscape, where the victim’s narrative takes place to the setting in which the offense occurred, the videos showcase the impacts of crime and empower victims to act. The characters share what happened to them, their doubts and fears, how they discovered that support existed, when and how they had the courage to seek for help and how they were assisted.

This multi-country campaign builds on the recent EU Strategy on Victims’ Rights, adopted by the European Commission in June 2020. The campaign goes in line with the first priority of the strategy ‘Effective communicating with victims and providing for safe environment for victims to report crime’ to achieve the EU’s objective to empower victims to report crime. The campaign was produced with the financial support from the Justice Programme of the European Union.

“One of the innovative aspects of the campaign is reflected in how information tools were developed. First, an in-depth research on the best practice in delivering information to victims was conducted, both in the partners’ countries and at the international level. Based on that research, the partners developed creative and tailored information materials that respond to the victims’ needs”, said Inês Nunes de Freitas, VSE’s Project Officer, who coordinates the PREVICT project.

Check out the campaign teasers below or on our Youtube Channel:

All materials of the “Reclaim Your Safety” campaign component can be downloaded on the PREVICT project webpage. Have an overview below: 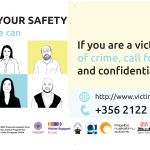 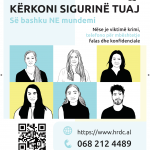 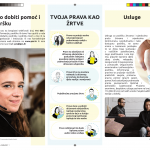 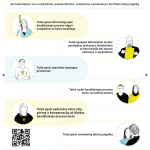 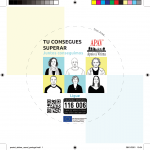 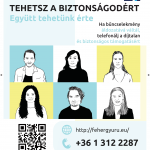 Where does the EU-campaign run?

The members and partners of Victim Support Europe involved in the campaign are responsible for the national campaigns.

They operate according to guidelines laid down by Victim Support Europe. The national campaigns typically involve local victim support services and public institutions concerned with victims’ rights. The campaigns focus on raising awareness of the existence of support services in respective countries; they also advocate at the political level for appropriate responses to victimisation.

For more information about the campaign partners and the national campaigns, please consult the list below:

How to get involved?

Become victim support ambassador
Write a letter to your MEP who can insure that the EU delivers for victims of crime
Spread the word: share our campaign messages on your social media channels!
Share your story with us on our social media channels!
Start a conversation: comment and question!
Share information about the campaign with your network and encourage others to get involved using the hashtag #itexists.
You can tag us in Facebook (@Victim Support Europe), in Twitter (@VictimSupportEU), in LinkedIn (@Victim Support Europe) and in Instagram (@victimsupport.eu).

News Release: Victim Support Europe and partners launch a campaign to inform of support services available for victims of crime in Europe.