Orphée, a dog who helps victims of crime

By Marina KazakovaFebruary 22, 2021News from members
No Comments 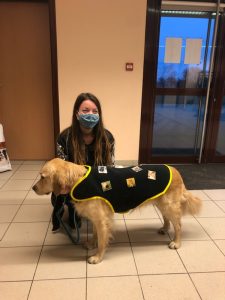 With Orphée, the Strasbourg victim assistance association Viaduq France Victimes 67 is deploying an unprecedented system in Bas-Rhin, France. This facility dog accompanies and supports victims, especially during their hearings by law enforcement and during court trials. This is both a special mission for this dog of exceptional qualities and a real challenge for Viaduq France Victimes 67.

The second facility dog to take up her post in France, her role is to accompany and support victims, especially minors, at different times and during certain acts of legal proceedings. She is specifically educated and trained for this purpose. Orphée is considered to be a true collaborator of the lawyers, psychologists and social workers of Viaduq 67. She is a working dog already at work alongside victims interviewed by the psychologists and lawyers of the association. 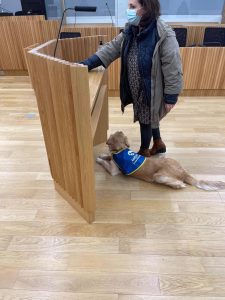 Between a reassuring presence alongside the victims, moments of relaxation and games, as well as rest, Orphée has a busy daily schedule. The well-being of Orphée, her good diet and state of health are the subject of special attention on the part of Viaduq France Victimes 67.

In addition, Orphée aims to support victims during hearings carried out by the national police and gendarmerie in the Bas-Rhin, during court trials, in particular those before a criminal court, during hearings with an investigating judge, or even during a psychological expert’s report as part of the criminal investigation.

Orphée can be called upon as part of the criminal investigation on the requisition of the public prosecutor of the Strasbourg court of justice. The presence of Orphée is never imposed on the future beneficiary. 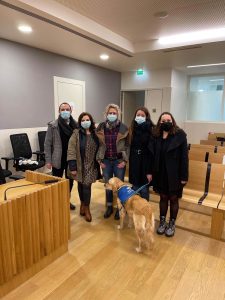 As early as 2019, Viaduq France Victimes 67 showed immense interest in welcoming a facility dog. The positive feedback we have heard about the experience with LOL in Cahors has reinforced our will to succeed in the implementation of this project.

The president of the association Jean-Michel MEYER, and the director, Sabrina BELLUCCI, were definitely convinced of the relevance of having a dog of this type during the presentation of its role and its added value for victims, at the European Parliament during Victim Support Europe annual conference in June 2019.

It is from April 2020, that Viaduq France Victimes 67, France Victimes and Handi’Chiens have concretely specified the contours of an allocation of an animal of this type within the association after its Executive Board approved this innovative project.

All the professionals of Viaduq France Victimes 67 showed great enthusiasm at the idea of welcoming Orphée, believing that it would be a real added value in the context of supporting victims.