Latest news from APAV: Seminar ‘Infovictims III – Innovation to humanise the justice system for victims’ / New awareness campaign on domestic violence against men: “To speak is a sign of strength” and more…

The Portuguese Association for Victim Support (APAV) will host the Seminar Infovictims III – Innovation to humanise the justice system for victims. The event will take place on 19 September, at the Calouste Gulbenkian Foundation, Lisbon, under the scope of the Infovictims III Project, developed by APAV and funded by the European Union’s Justice Programme (2014-2020).

The Infovictims Project was launched in 2011 with the aim of contributing to the quantity and quality of information available to victims of crime and to society in general about the justice system, about their rights and how to exercise them. As such, the teamwork developed with the national and international partners here gathered has resulted in the creation of accessible and inclusive information tools, such as the Infovictims Website.

In this seminar, we will celebrate the success of the third edition of the Infovictims project, by promoting a broad discussion on how the justice system can be humanised from the perspective of the victim and the professionals that integrate it.

The final conference of the Infovítimas III project will feature Portuguese and international speakers. Therefore, the sessions will be held both in English and Portuguese. During the seminar, a simultaneous translation service from Portuguese to English and from English to Portuguese will be available. 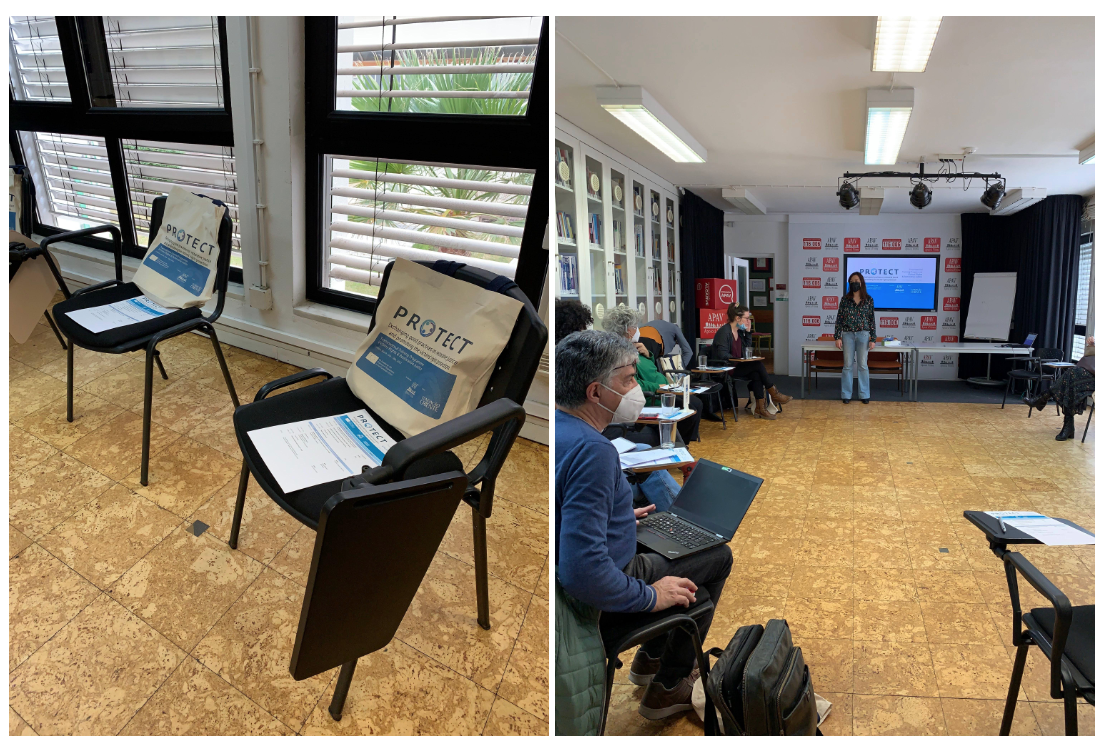 From March 15th to 18th, APAV had the opportunity to organize the 1st Transnational Training Event in the scope of the “Project PROTECT – sharing good practices on restorative justice and promoting the protection of victims’ rights”, hosted and organized by APAV, with the support of the Oriente Foundation.

During these days we welcomed 40 trainees, collaborators of the project’s partner organizations: VSE, SPONDÉ, MEDIANTE, EFRJ, WAAGE and the University of Barcelona, as well as the project’s coordinating organization: WELCOME APS.

The first three days of the event were marked by training sessions, led by APAV, VSE and EFRJ. Among the various topics addressed, we highlight the European approach facilitated by the VSE, which highlighted topics such as the “EU strategy for victims 2020-2025” and the assessment of individual needs of victims of crime. APAV then took the floor, outlining a national panorama on the implementation of the Victims’ Directive in Portugal, the impact of crime and the consequences of victimization. EFRJ, on the other hand, focused on the legal framework of restorative justice and how it can offer a safe space for victims, protecting their rights and needs.

On the last day there was the opportunity to visit the APAV facilities, namely: the Victim Support Office and the APAV Headquarters in Lisbon, the Training Center and the facilities of the Integrated Distance Support System (SIAD). The event was also marked by several moments of networking, sharing best practices and knowledge.

New awareness campaign on domestic violence against men: “To speak is a sign of strength”

In 2020, the Portuguese Association for Victim Support received a total of 1,627 cases of male victims of domestic violence, a number that has been growing year by year. Stigma, prejudice, fear and low self-esteem prevent many men from talking about it and coming out as victims, which leads to the belief that the real numbers will be much higher than the identified cases.

With the purpose of fighting prejudice, APAV, in partnership with PEPPER agency, launched in march a new campaign that intends to alert to this reality and tell men that talking about the issue, and assuming that they are victims, is a sign of strength.

On April 20, the Portuguese Association for Victim Support promoted the event “Six years of prevention and support for children and young victims of sexual violence: the CARE Project – Balance and Presentation of the Prevention Manual” at the Calouste Gulbenkian Foundation, in Lisbon. At the event, the Manual of the CARE Program – Universal Prevention of Sexual Violence against Children and Young People was released, with a presentation by the Associação Nuvem Aquarela; Support Statistics from the CARE Network, by Carla Ferreira, were also presented at the event.