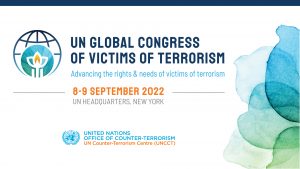 VSE’s Executive Director Levent Altan participated in the first United Nations Global Congress of Victims of Terrorism, organised by the United Nations Office of Counter-Terrorism (UNOCT), in New York. Held under the theme of “Advancing the Rights and Needs of Victims of Terrorism”, the Congress provided a platform for dialogue and engagement on a victim-centric approach to countering terrorism and preventing violent extremism conducive to terrorism. More than 600 participants, including close to 100 victims of terrorism from 25 countries across the globe attended in person.

Aimed at advancing dialogue and engagement on a victim-centric approach to countering terrorism and preventing violent extremism conducive to terrorism, the Global Congress High Level opening session held in the United Nations General Assembly Hall began with a poignant call to action by ten victims and survivors of terrorism from around the world.

This call to action was followed by a High-Level Parliamentary Session during which representatives of national assemblies emphasised the need to develop, strengthen and tailor domestic legislation to respond to the complex needs of victims. They also highlighted the importance of having the rights of victims of terrorism clearly recognised in national legislation, in line with international human rights frameworks. 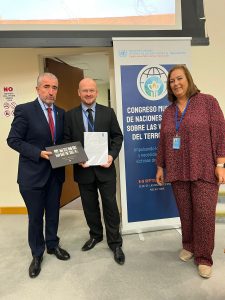 Following the High-Level opening session, the Congress continued its work through six interactive thematic sessions spread throughout the two days that were expected to yield clear and concrete recommendations for action at all levels. The themes of the sessions include the importance of remembrance; access to justice for victims of terrorism; rehabilitation, assistance and support as well as protecting and addressing the rights and needs of victims of terrorism with specific needs.

Levent Altan participated in a panel session on ‘Cross-border victims of terrorism’, discussing the complex and unique array of challenges these victims might face and how this can impact the risk for secondary victimisation. He pointed out what Member States and civil society organisations (CSOs) can do to promote and facilitate collaboration efforts, for instance through building solutions together and establishing strategic and cooperative mechanisms. Delving into concrete details, the panellists further discussed what steps Member States and CSOs can take to ensure special care for assistance and support to cross-border victims while in the country of attack, as well as to those who return to their country of origin, especially in the long-term. To watch the recording of the session, please click here.

Addressing the audience, ‪European Commission Coordinator for ‪#EUVictimsRights Katarzyna Janicka Pawlowska, who moderated the session ‘Rehabilitation, assistance and support’, said: “Our role as individuals, states, civil society organisations is to take care of the individual needs of victims”.  Andrea Kerney, Director of US office of Justice for overseas victims of terrorism, encouraged delegates to think of the psychological safety of victims in criminal justice, in her words, “encouraging safe justice”.  Panellists emphasised the need for long term support, proper resources and funding.

VSE member organisations V-Europe and NATAL also participated to the UN Congress. NATAL’s speech highlighted the ways we can best support victims of terrorism, thereby emphasising the need to have a hotline available, as well as the importance of cycles of interventions to teach and train people how to support victims.

The Global Congress also featured the “Memories” campaign, which tells the stories of 22 victims of terrorism through films and a photographic exhibition. The campaign allows the audience to relate to victims, to feel their loss and see their resilience, and to better understand the importance of remembering and paying tribute to victims of terrorism worldwide.

The Congress concluded with a Chair’s Summary that laid the groundwork for a roadmap that will guide the international agenda in advancing the rights and the needs of victims of terrorism.

Additional information can be found on the dedicated webpage for the 2022 Global Congress.